The U.S. Consumer Product Safety Commission has announced an official warning to Americans: discontinue use of the Peloton Tread+ treadmill immediately. Though stopping short of launching a recall for the product, the agency hopes to spread awareness of the exercise machine’s potential dangers to children. The treadmill has been linked to at least one death of a child. Dozens of other incidents have been reported – one of which was caught on camera.

A disturbing new video shows just how dangerous the Peloton Tread+ can be for little ones. Regulators say they released the footage to demonstrate how quickly children can become injured by the exercise machine. In the video, a young boy is playing near the treadmill when his ball gets trapped under the equipment. The child struggles to go after the ball and finds himself stuck as the treadmill spins on freely. Thankfully, he’s able to free himself without injury (according to the CPSC), but the footage is indeed shocking to witness.

Linked to Serious Injuries to Children 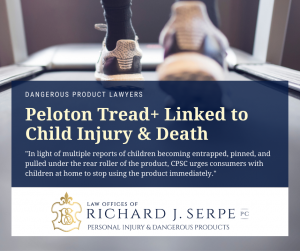 All exercise equipment can prove dangerous for children when left unsupervised, but according to the CPSC, the Peloton Tread+ is especially risky for small kids. The machine features rear rollers that can pin, entrap, and pull small children under in mere seconds. The $4,295 treadmill poses a serious risk to kids for abrasions, fractures, and even death.

We know at least one child has died in an incident involving the Peloton Tread+. If you have this exercise machine in your home, keep it unplugged and locked away when not in use. Should you or someone you love become injured while using a dangerous treadmill, consult with a product liability lawyer as soon as possible.

The Law Offices of Richard J. Serpe, PC, along with a network of co-counsel, are currently investigating cases nationwide for parents whose children have been seriously or fatally injured by a dangerous treadmill. Contact us to discuss your potential case during a free, no obligation, consultation 877-544-5323.

We do not charge any legal fees unless we settle or win your case. We understand that the fees associated with a lawsuit can be a barrier to justice, and we believe that everyone should have a voice when it comes to asserting their rights. Corporations and insurance companies have tremendous resources, and our no fee promise levels the playing field.

The Law Offices of Richard J. Serpe, PC is a personal injury and product liability injury law firm representing the injured. For over 35 years, Richard Serpe has been associated with complex litigation, managing cases with difficult scientific and medical issues. As a personal injury and dangerous products lawyer, he advocates for those who have been injured due to the negligence of another person, dangerous product, or company. A substantial portion of his career has been devoted to the representation of injured children.